Sailing through the aquatic birds lets, whiz-bang to the airy view of cutest smart buddies to capture the impressive collection of flamboyant, colorful feathered attire andÂ skillfulÂ displays of love & affection!! As babies love to beÂ cuddled, even the birds do! Cuddle them in your safe arms & pet them as your own!!

Look at those Parrots! The most talkative birds I ever discovered in my Life! They are highly demanding and ruling as they expect to get full on attention only to them!! Birds love to chew seeds, nuts, berries & fruits. Letâ€™s take a quick look at different species of parrots.

Do birds like to stay just in their natives? Never! They keep migrating and traveling all over the Globe. Meet these social, curious and playful Sun Parakeets only @ Birds Park.

This handsome charming parrot is native to Solomon Island, New Guinea. Electus is just like human beings! He laughs when he is glad & excited. Isnâ€™t amazing to find human traits in a bird?

This Mexican charming beauty is very famous and popular for itâ€™s sweet and friendly nature as they enjoy interacting with people.

Hailing from South America, Blue fronted Amazon Parrot is one of the most common Amazon Parrot. He is famously known for his unique talents as an amazing talker, mimicker & for his love for music!

Applause in admiration of Toucans, the members of Ramphastidae family from South American Tropical Forests. Toucans are bright and large colorful birds. They do act as Doctors! They regulate their body temperature by adjusting the flow of blood to their beak. They tuck their beak under the feathers to keep them warm!

Toco-Toucan is the largest of all toucans. The dazzling look of black body, white throat and a long colorful beak will heartily steal your lens! During itâ€™s flight, Toco-toucan flap their wings zealously and glide.Â  Toco Toucans usuallyÂ vocalize with a series of gruntingÂ or snoring sounds.

TheÂ Channel-billed ToucanÂ is the most widespread species of “croaker” because of the quality of the loud vocal sound. It hails from northern and central South America. It is renowned for its wonderful long bill measuring 48cm!

The Red-Billed Toucan is the worldâ€™s second largest toucan. It has a large colorful bill and bare bright blue skin around the eye. They have their unique way of eating. Toucans pick up food with their bills, throw it high up in the air and then swallow it. Their sound is heard as a musical beat â€œKu Ya Keâ€. 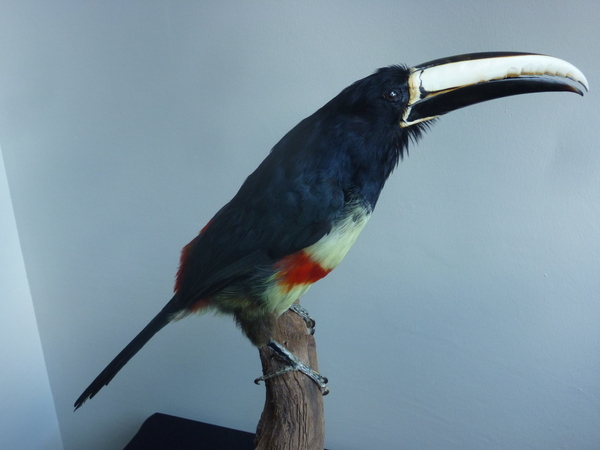 Swing with one of the largest Aracari Species which has landed in Birds Park flying all over the air from South America. Black Necked Aracari is very social and live in groups. They more often sleep in a tree hole and they fold their long tail over their back for a cozy nap!

The bird in bluish purple is the native of African Savanna Aviary. It looks as a queen of birds because of the beautiful crest on its head. Though the call of Turaco sounds like â€œGâ€Way, meaning â€œGo Awayâ€ Birds, still they are settled in Birds Park forever & Ever. They do invite guest to meet them leisurely so as to spend ample of time with these gregarious creatures.

Share yourÂ pleasure of happiness byÂ meeting these ever cutest smart buddiesÂ and meanwhile watch over the next flickering feathered beauties who are still on their way to reach out to you!